The emergent third way of governance in times of crisis: Witnessing seedlings of an (Urban) Sharing Society?

The Corona pandemic hitting the world

The current corona pandemic is a crisis of unprecedented extent and it puts enormous pressure on societies globally. German chancellor Merkel has proclaimed the current crisis to be the biggest challenge since World War II, most likely leaving the world in a different state than before. In contrast to for example the financial crisis in 2008, the current crisis has a much broader impact on society at large. This is not to say that individual effects are being the same for everyone. Instead, whereas for some the current situation is an almost welcomed deceleration, others are threatened in their existence. And it is often the well-paid jobs that can be done from home while those working in systemically relevant jobs are most at risk of infection and at the same time underpaid. And yet, on a societal level the crisis will affect all of us as it will have an impact on our social environment and with it the way we live, work and do business in the future.

The political response and a strong societal narrative: solidarity

In terms of handling the crisis from the political side, we are currently in the midst of acute crisis management. In order to flatten the curve of infections, radical measures are taken marking unprecedented interventions into society as a whole. The core narrative behind measures currently taken by German politics and explicitly stressed for example by President Steinmeier is centred around solidarity: Only by working together we can prevent the health care system from collapsing and save those groups that are most at risk of severe courses of Covid-19. The call for solidarity has reached a level more tangible and encompassing as known to many of us before, especially in times of increasing individualization. It is this narrative and its accompanying principle of “each and everyone counts” that together might revive not only what is core to our democratic system but also what is needed in the face of future challenges. It is also what distinguishes democratic from authoritarian systems – while the authoritarian response to crisis is appealingly effective due to its radicality, it misses out on the learning opportunity to potentially grow as society and to save a narrative of solidary crisis management to our collective memory. This is true for local communities, for national societies and for international collaboration. As the head of the German Green party Robert Habeck has put it in an interview published in the ZEIT of March 26: It is yet to be decided if through the crisis we will fall into egoisms and national state thinking or if we seize the chance to learn what it takes for jointly tackling global crises in the future: solidarity between people, generations and states alike.

The emergent third way of governance in crisis management

Looking more closely into the revived narrative of solidarity, there is yet another, more active level to it coming from individual citizens as well as from civil society actors. In many places across Germany and around the world, the physical requirement for “social distancing” seems to draw society somewhat closer together: Initiatives for supporting especially those at risk to get through the crisis have been popping up within a few weeks only. Platforms connecting elderly people with younger ones willing to do their shopping, people volunteering to help in Corona testing stations, in hospitals and in elderly care, musicians playing concerts in front of elderly homes, yet others offering their help as harvest workers, entire neighborhoods that are gathering on their balconies to sing together and applaud those working in health care and at supermarket counters.

From the side of business, innovative responses have shown a high level of spontaneity in taking on societal challenges. On the one hand, there is the creation of (often not for profit) business solutions in order to directly tackle challenges arising from the crisis: New platforms are offering voucher systems to support the local economy, existing crowdfunding platforms are offering their services for free to all those in need for quick financial support, a local distillery and a flower shop owner jointly start producing hand sanitizer, the textile industry starts sewing face masks. On the other hand, there is the shift from the analog to the virtual world: freelance coaches are offering webinars and online workshops, fitness and yoga studios are digitalizing their sports program, and event apps are featuring streams of virtual events such as concerts, poetry slams and DJ sets. Generally, digital means are being explored as never before, meetings are being held virtually and entire conferences and events are transferred from the analog to the virtual world.

The third way of governance refers to the coproduction of shared – real and virtual – places by various actors from politics, civil society, and business. Although actors are always shaping and being shaped by their environment, it is the active assumption of responsibility that is currently – in many instances – to be witnessed in crisis management. Despite the fact that politics on national as well as on state levels have assured their extensive financial support, civil society and especially smaller business actors are taking over responsibility in co-handling the crisis. They do so also in direct cooperation with the government, for example in Germany with the nationwide hackathon #wirvsvirus announced by the federal government and seven social initiatives. On March 21-21, about 23.000 participants have worked on 1500 challenges that were defined by the federal government as well as by companies, hospitals and citizens. The best ideas were awarded by a jury and will be implemented by the government.

In the current situation, crisis seems to be proving its duality of destructiveness and creative power. The destructiveness of it has hit the world with forces unforeseen and unimaginable to most of us a few months ago – and the true extent of it is yet to be seen in the months to come: the number of people directly affected by the virus, those losing their lives or losing a close person, those working to their maximum to keep the health care system or other essential sectors running, those worrying for their existential base, their jobs, their daily income, kids (and adults) suffering from increased domestic violence, and the list could go on.

And yet, there are also hints to new ways of governing societal life that might impact society way beyond the crisis. Initiatives that have been popping up during the past weeks can be seen as seedlings growing from seeds that were planted long before the crisis hit. Engagement does not emerge from scratch within days only. It is the sudden state of emergency that has served as trigger to activate engagement and responsibility. This is, by far, not to say that there are no counter examples of free riding individuals not wanting to be restricted in their lifestyles and of corporations externalizing their losses to society the best they can. But it is to say that there are seedlings growing from solidarity and social responsibility. If these seedlings are to impact society as a whole, they need to be nurtured in order to scale their scope – in breadth as well as in time.

Scaling in breadth addresses the limited focus of current initiatives and their beneficiaries. Whereas seemingly countless (digital) platforms are forming to save local retail and gastronomy, much less focus is given to supporting social and cultural initiatives or performing artists and many others that contribute to making society as diverse as it is. Also, the sudden shift from the analog to the digital world leaves marginalized groups mostly out of sight. Initiatives like the German “Tafel” cannot operate in their regular way, shelters for homeless people are closed and there are very few alternatives. We are thus running the risk to make solidarity exclusive to specific places and groups perceived most “relevant” to keep up the good life (for a certain group of people) while forgetting about other groups who are probably most dependent on solidarity. The challenge thus will be to widen the scope of solidarity, taking all societal groups onboard.

Scaling in time (or embedding) refers to the need to connect acute crisis management to a new societal narrative. It refers to the need of learning from the crisis and to nurturing those seedlings that are offering a more solidary and more inclusive societal narrative. It also refers to the need of addressing those structural flaws that have enabled this crisis to hit society as hard. It means for example that current expressions of gratitude – be it in form of applause or in form of monetary boni – for people working in health care and at supermarket counters need to be turned into fair wages in the long term. It also means rethinking the role of the economy as a means to serving society rather than being an end in itself. And it refers to turning initiatives into institutions – meaning the translation of initiatives in acute crisis management into a long-lasting commitment to look after each other. It is the question of how seedlings that are carrying a new societal DNA (and this is more or less true for different initiatives) can be rooted in society in the long term.

What we refer to as the urban sharing society in our research project is an abstract imagery of an alternatively governed society in the context of societal (here: specifically urban) transitions. If urban or not, the current crisis seems to be triggering some of the essential elements that a sharing society in the sense of coproduction of shared space and societal life by and for its actor groups could entail. If we refer to those initiatives triggered by the current crisis and carrying a new societal narrative as the seedlings, it is the spread of those seedlings, their subsequent growth and their strong rooting in future society that might make the imagery of a sharing society come to life. 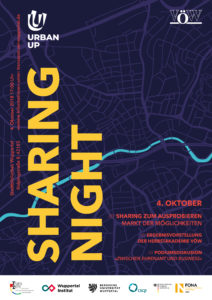 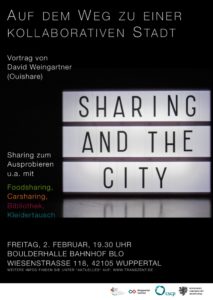